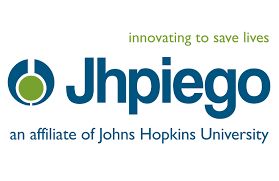 Jhpiego is an international non-profit health organization affiliated with Johns Hopkins University. The group was founded in 1974 and initially called the Johns Hopkins Program for International Education in Gynecology and Obstetrics, but is now referred to simply as Jhpiego.

Since its founding in 1974, Jhpiego has been innovating to save the lives of women and families worldwide. From the first day, Jhpiego has been asking the question: How can we make lifesaving services available and accessible to the people who need them—all over the world?

Dr. Theodore M. King, an early innovator and champion for women’s health, was the moving force behind the founding of Jhpiego, an affiliate of Johns Hopkins University. In the early 1970s, King recognized the need to make physicians, nurses and administrators from developing countries aware of reproductive health breakthroughs, such as laparoscopy (a procedure used to inspect internal reproductive organs for infertility or to provide contraception by closing off the fallopian tubes) and modern contraceptives.
Originally known as the Johns Hopkins Program for International Education in Gynecology and Obstetrics, the organization was funded through the United States Agency for International Development (USAID). Under King’s leadership, as a founder, trustee and later president of Jhpiego for 14 years, the organization conducted a steady stream of programs throughout the developing world.

They are in the country since 1999, our focus has been on quality health services for families.

From That time More than 3.6 million Tanzanians have learned their HIV status through Jhpiego-led initiatives and more than 840,000 men have received voluntary medical male circumcision services for HIV prevention.

Over 40,000 women have been screened for cervical cancer, with 99% of the 2,384 women identified as having precancerous lesions and eligible for cryotherapy treated. More than 3.4 million antenatal care visits and more than 391,000 deliveries took place at Jhpiego-supported health care facilities.

More than 8,000 health care providers in over 3,500 facilities countrywide have the skills to competently provide high-quality antenatal care and basic emergency obstetric and newborn care to pregnant women.

Working to Make a Difference
We are proud of our contribution to improving the health of women and children throughout the world and recognize that our leadership position in international public health is due to the excellence and dedication of our staff, both in the field and in our headquarters in Baltimore.

To View the opening Job Opportunities Just follow the yellow link at the end of this post, Or You can send your CV/Resume through the contact details listed below to apply for any positions.